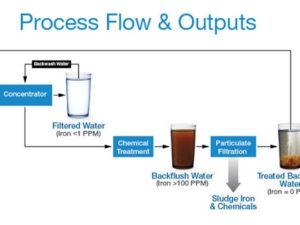 To level the pH factor, chemical pretreatment is performed in an effort to facilitate rapid aeration then chemically dosed water sends into the aeration tanks.

Chemical dosed water is sent into the aeration tank consisting of three chambers. The raw water is allowed to sprinkle at the primary chamber through specially designed perforated pipes. The water travels from the first chamber to the other two chambers through as it should be designed more than one vents at variable levels of the bifurcate partitions, as a result, affords ZIG ZAG motion. when the water reaches the 1/3 chambers the dissolved iron receives oxides and turns out to be suspended iron particles.

The suspended iron water is handed through Iron elimination unit, the filter media is supported on gravel bed that consists of more than one layers of steadily large sizes of Manganese Dioxide, Activated Carbon 900 IV, Graded quartz sand, Fine sand, superb quality white sand, and Pebbles, which hold the suspended iron particles. During the filtration cycle, the filter bed retains the dirt and suspended iron particles from the water and accumulates within the filter bed.
As the filtration process, the filter media receives loaded with the retained particles, this result increases of pressure drop throughout the filter, whilst a predetermined pressure drop level is completed filter is shut down for cleaning.